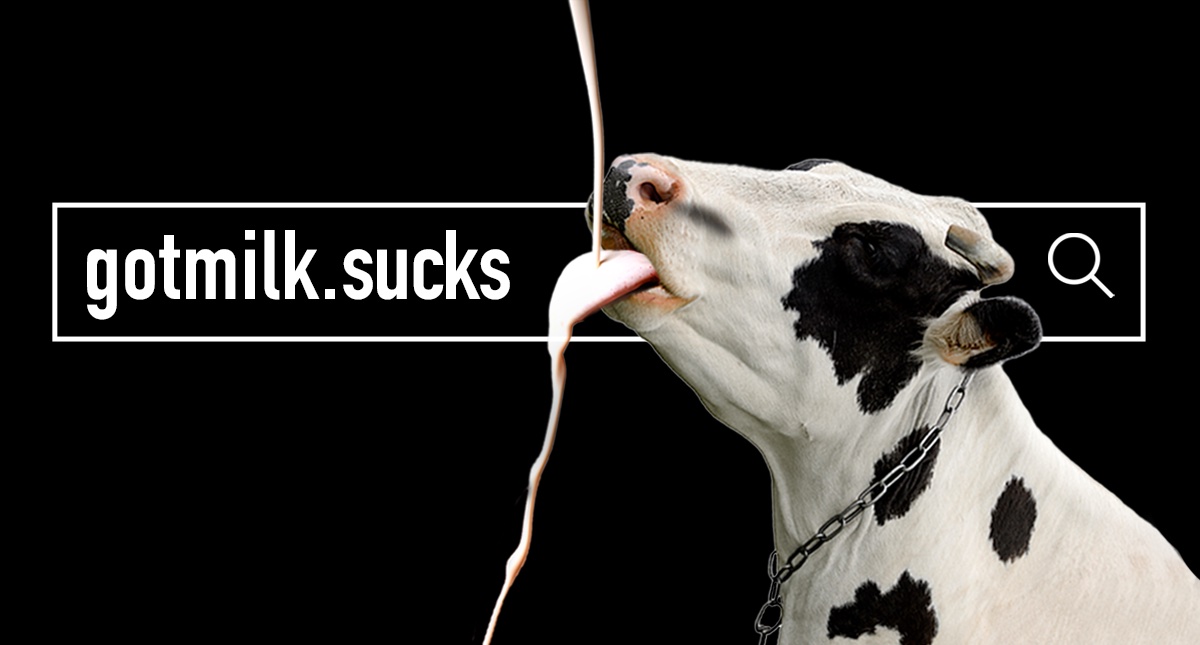 The first Got Milk? ads launched in 1993 to boost the sales of dairy products across North America. Directed by Michael Bay, the campaign was instantly iconic. It’s referenced throughout popular culture, and is likely the most-quoted line at breakfast tables to this day.

Left out of the ad’s messaging was that the dairy industry is bad for the environment, bad for animals and bad for our health. As a society, we’re starting to come around to the dupe job that’s been pulled on us by Big Dairy. And if almond or oat milk brands—the highest-selling plant-based dairy alternative products—made similar mo(oooo)ves, we could finally sunset a destructive staple of our diets.

By now, you’ve probably tried dairy-alternative products from brands like Oatly, Earth’s Own and Almond Breeze. Not only are they providing healthier versions of breakfast’s most famous beverage, but they’re also disrupting the long-standing myth that animal milk is beneficial for humans, using marketing campaigns like Humane Milk is a Myth, Don’t Buy It and De-Calf your Coffee to get their message across.

They can go even further, and .SUCKS exists to hold the feet of truth-averse corporate behemoths to the fire. Got Milk? GotMilk.Sucks.

How Plant-Based Milk Brands Can Use GotMilk.Sucks

The dairy industry, no doubt, planned to stay at its level of ethically dubious market dominance until the cows came home. The gallops are getting closer, as the plant-based milk market is expected to be worth a whopping $43 billion by 2029. The original Got Milk? campaign consisted of dairy companies coming together to advertise a common product. There’s no reason the dairy-free alternatives poised to take their place couldn’t do the same.

A creatively run GotMilk.Sucks campaign would be an award boon for any savvy PR firm acting on behalf of plant-based milk substitutes. A hub like this—showcasing facts, videos, testimonials and product information in a compelling fashion—could cement the loyalty of those who have already made the switch, and action on the curiosity of those who are leaning toward a dairy-free life. Even for the staunchest milk zealot, it creates an avenue for dialogue—a key component of any successful marketing initiative.

Imagine a GotMilk.Sucks website as a beacon illuminating the darkness of the dairy world and the systemic problems stemming from food policies heavily influenced by special-interest groups. Should we really be drinking three cups of milk a day? Or is this yet another example of a powerful industry throwing its weight around in Washington to push its own agenda, health and environmental costs be damned?

GotMilk.Sucks could be the fulcrum for a revolution in health, environmental stewardship and animal welfare. And we could all have fun while doing so (well, maybe not the dairy industry).

Why the Dairy Industry .SUCKS

There’s a significant amount of information available to any brand marketer looking to attack one of the biggest influencers in the food and beverage vertical. Dairy is responsible for an astonishing 30% of global greenhouse gas emissions, making it one of the largest sources of pollution in the world. The industry has been found to contribute to climate change, deforestation and biodiversity loss. Across the globe, 270 million dairy cows emit a combined total of 44% of all livestock-based emissions of methane.

Dairy farming is also wantonly cruel to the sources of its ill-begotten bounty. The industry uses cows as mere machines, abusing their reproductive systems to produce an everlasting flow of milk. The torture our bovine sisters endure to ensure we have a beverage or breakfast supplement can no longer be tolerated, much like the lactose in milk products that makes millions of Americans ill.

Dairy products are bad for your health beyond lactose intolerance, as they also contain high levels of saturated fat and cholesterol. For those reasons, a growing number of consumers are dropping dairy—primarily for their gut and digestive health.

Plant-based milk products can say a lot by using a classic ad slogan and flipping it on its head. Think about all of the marketing campaigns and lies that have come and gone, unchallenged. Lobbying goons and industry despots have had the power to say and do whatever they want for far too long. Now, thanks to the internet and the ease of information-sharing, challengers in the market can strike back in a tangible way.

Dairy is just one in a litany of industries that have built their empires by pretending to be on our side—when the truth is their profit model requires a boot to our collective neck. It’s time to ask, what other industries can we totally and irreversibly disrupt? And how can a .SUCKS domain help expedite the process? Climate disaster, rampant inequality and deepening divisiveness require the bold response only bold messaging can create.

Over at get.sucks, you can continue the good fight against the dairy industry by registering GotMilk.Sucks—or build the foundation for your own anti-campaign that targets another shady enterprise.

A look at five of the worst leaders 2022 offered, and how their fall from grace impacted their brands and the people they were meant to inspire.

Bitcoin.Sucks Changes The Narrative On Cryptocurrency

By flipping the script on an anti-crypto statement, digital-wallet manufacturer Coinkite uses Bitcoin.Sucks to drive interest in their products.

A Subjective Overview of the History and Future of Domains

Before you know where you’re going, it’s good to look back at where you came from. A brief history of domain registries can help you understand the possibilities of the modern era.